Voices of Transition presents innovative, inspirational – and concrete – solutions to the food security challenges we humans increasingly face. It explores agroforestry models in France, permaculture and TRANSITION TOWN initiatives in England and the organic farming revolution in Cuba.
By focusing on immediate profit and ignoring millennia of experience in agronomy, agroindustry is responsible for the unprecedented erosion of soils now occurring around the world. Add climate change and dwindling natural resources to the picture, and it would appear that even societies in the Global North are no longer safe from famines. Voices of Transition is a film which is optimistic but clear-sighted. It makes clear that these current and impending crises are, in fact, positive challenges!  65 minutes.

After the film, Kris Hikari will share how Friends of Trees is working in Salem to build a sense of community through the simple act of planting trees together. She will touch on the many values of the “urban forest” and what we can all contribute to the growth and health of this commonly overlooked natural resource. Kris will also share upcoming opportunities to plant with Friends of Trees, and additional resources to get involved with the stewardship of Salem’s urban forest.

Friends of Trees is the northwest’s biggest and longest standing community forestry non-profit that plants trees with local volunteers throughout the Willamette Valley and into Vancouver, Washington. Our mission is to bring people together to plant and care for city trees and green spaces across the northwest. Over the course of the past 26 years, we have planted over a half a million trees and native shrubs with the help of tens of thousands of community members. FOT currently plants in over 20 municipalities, and is in it’s 4th planting season in Salem. Our efforts are largely driven by water quality goals, but also aim to increase shade and natural beauty in the city, reduce the urban “heat island effect”, and to improve urban livability overall.

Kris Hikari is a passionate steward of urban environments for the well-being of both people and wildlife. As Regional Programs Manager with Friends of Trees, she helps establish tree planting programs in new communities throughout the Willamette Valley. Kris is an ISA-certified arborist and has worked in the natural area restoration and urban forestry fields for over seven years. She holds a Master of Landscape Architecture degree from the University of Oregon, and previously studied geography of the Pacific Northwest at Portland State University. In her free time, Kris is an avid gardener, birder, naturalist, and bike builder.

This event is made possible by support from the Unitarian Universalist Congregation of Salem, LifeSource Natural Foods, and private donations from people in our community. Thank you for your support!

The NWPI offers a free film series in Salem, Oregon on the 4th Thursday of the month, February-October in 2016.  We are lining up films and speakers on transition towns, natural building, worms, and other permaculture topics. We are also considering repeating key films that have gotten many repeat requests. So, as we finalize the series for 2016, we’d like feedback from you. Please send an email letting us know which films you’d like to see again, and what topics interest you for future films? If you are not already on our mailing list, keep up to date on our events by sending an email with “subscribe” in the subject line to, nwperma at gmail.com.

NWPI will be offering our 36 hour, Permaculture Essentials for the Pacific NW, class again starting in September. If we have enough interest in a Saturday morning summer series, we may offer it then as well. Please contact us as soon as possible if you are interested in taking classes, as seats fill up fast. NWPI will also be offering our two 12 hour follow up classes that complete the PDC, Permaculture Solutions for Recharging Landscapes with Water and Earth, and, Permaculture Strategies for Community Building and Global Repair, 2016 dates TBD.

We were impressed with this article on the history of fruit walls and wanted to share the link with you below. Happy 2016 from NW Permaculture Institute!

Fruit walls in Montreuil, a suburb of Paris

We are being told to eat local and seasonal food, either because other crops have been transported over long distances, or because they are grown in energy-intensive greenhouses. But it wasn’t always like that. From the sixteenth to the twentieth century, urban farmers grew Mediterranean fruits and vegetables as far north as England and the Netherlands, using only renewable energy.

These crops were grown surrounded by massive “fruit walls”, which stored the heat from the sun and released it at night, creating a microclimate that could increase the temperature by more than 10°C (18°F).

Later, greenhouses built against the fruit walls further improved yields from solar energy alone. It was only at the very end of the nineteenth century that the greenhouse turned into a fully glazed and artificially heated building where heat is lost almost instantaneously — the complete opposite of the technology it evolved from….
To read more, visit lowtechmagazine.com 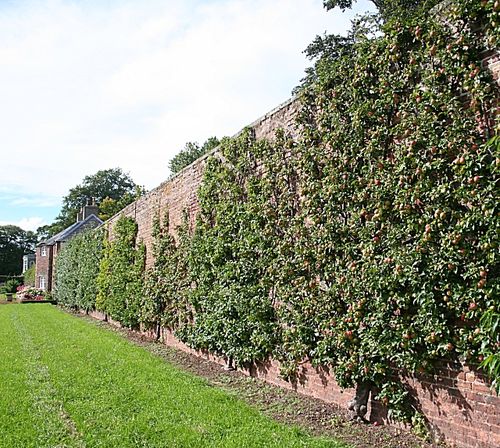